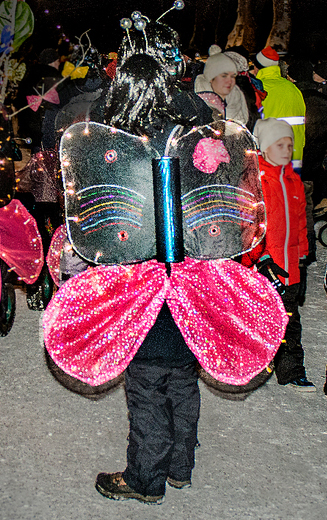 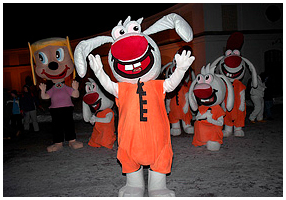 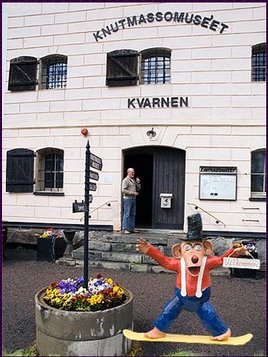 The aircraft painter and the bunny 2006.

January 13 is Knut´s day. For the people in Scandinavia and especially Sweden, this is the very last day of Christmas. For aircraft painter Jörgen Mattsson(30+) this is a always a special day. January 13 is the day when he and his friends find out if their efforts are going to pay off. They have worked hard for a whole year to prepare masks and dresses for the big parade through small rural village Gimo.

The village lies some 80 kilometers north east of Stockholm. In the 17th century, Gimo was known for the Walloon fining process. Today, the village is well known for the winter carnival that takes place  every winter on Knut´s day evening. Already in the early afternoon many young people, dressed up in fantasy costumes, walk around the village, ringing on doors. The purpose is the inhabitants of the houses should donate gifts to the anonymous callers. Later in the evening, thousands of people walk the village street and look at the amazing parade. Several teams from the neighbourhood show their most fantastic masks made mainly from papier maché. During the parade, people can vote for their favourite team. The team with the best masks and dresses, receiving the majority of the votes, are elected winners. Naturally, the competition is fierce between the teams.

For Jörgen, this year was going to crown his efforts. Together with his friends he worked extremely hard. First the team gathered for a creative session, selecting what figures they were going to prepare. The choice fell on "bunnies". Next, the long process in making the masks and dresses began, involving dedicated work for months and months, until Knut's day finally arrived.

The early evening of January 13 2006 was freezing cold. The full moon spread it' s silvery  light on the crowded street in Gimo. The snow creaked under their feet when Jörgen and his bunny friends cheered and greeted everyone along the street. The cuddly-looking bunnies soon became very popular. And when the parade came to an end, Jörgen and his rabbit friends were the winners!

At this moment Jörgen is again busy with the new dresses for the next Knut's day. What will the masks look like then? That is a well kept secret, only to be revealed next January 13!